Sorry, I meant to post this earlier and just forgot. It's a little piece of fan art for Caanan Grall's Max Overacts. He posted it on his site as well but in case you missed it: 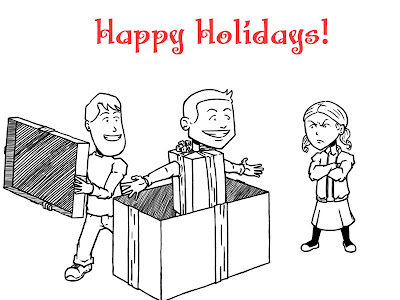 Hope everyone is having a great holiday season!
Posted by Darrell at 12:13 PM No comments:

For the annual Drunk Duck Secret Santa project (though I guess it's not annual since they started doing a summer one that I missed) I got Salsa (that would be his username) who had asked for Christmas themed "nose art". I had to double check what nose art was (artwork for the nose of an aircraft/shuttle) and still not really knowing too much about it here's what I came up with:

And with a little bit of red:

I'm starting to see more and more "2010" stuff coming out. Such as the "Best Comics of 2010" or whatever else. So I considered doing something myself but to be honest, I'm not sure what I could come up with for "Best of" lists. For one thing, many of the books I'd put as the best books I read this year were ones that came out in 2009 (*cough*Asterios Polyp*cough*) and I found out about from other "Best of 2010" lists. So I guess I'm just behind the times and who wants a list by someone who's late to the party. So in the end, here's a breakdown of my 2010.

The most memorable would probably be Fan Expo Canada. There were parts that were horribly organized but getting to spend three days geeking out is just too much fun. The Stan Lee package was worth it (though I've heard from others who felt otherwise) and getting to meet him was a big moment for me. The brief pass by William Shatner's table as he signed my photo was a little disappointing. But hey, I'm one of those really weird guys who enjoys being able to say I saw these celebrities in person. And a few of them really made the experience better. Felicia Day was very nice and outgoing. Summer Glau was very friendly. And I heard experiences from other Convention goers that many of the celebrities made it well worth the hassles we went through (for the most part). And of course there was the comic creators for me. Getting artwork from Darwyn Cooke, Andy Belanger, Caanan Grall, Steve McNiven, and others was awesome. The panels (the sketching duels, Darwyn Cooke's panel, etc) were all very entertaining. It was just a great weekend and as soon as I got home I couldn't wait for next year's Fan Expo.

As for comics, after hating Jeph Loeb's Hulk run I was glad that Greg Pak got the Incredible Hulk series back with the big green guy front and centre (with a somewhat new supporting cast). But as I moved to TPBs this year I haven't read the book in a while (since World War Hulks ended). Despite being a lifelong Marvel fan, The Incredible Hulk and possibly the She-Hulks series will be my only two Marvel books.

My favourite "new to me" series would be Atomic Robo. It's still a fairly new series with just a few TPBs out but I definitely recommend checking it out. You can even grab the Free Comic Book Day issues off the web.

In terms of WebComics my favourite remains the Abominable Charles Christopher by Karl Kerschl. Absolutely beautiful artwork with a great mix of strips, from funny to heartbreaking. My favourite new strip would be Max Overacts by Caanan Grall. A fun storyline with unique characters and it keeps getting better and better.

And while we're on the subject of WebComics, we saw Zuda come to an end with several of their books going to ComiXology which obviously had a lot to do with the release of the iPad. You'd think I'd have a lot to say on that but I think I'm talked out about it. And the truth is that although I've read a few comics that were available for free on ComiXology I've never bothered to buy one there. There are a lot of factors that lead to this (not owning an iPad, the price, that I prefer to physically own books so I can feel confident that I'll be able to pull them out and read them 10 years from now, etc) but I don't really want to get into that either.

One thing I'm starting to get into is the online studios or whatever you call it. Where a group of artists share a location (a blog, a webpage, or whatever) to display their artwork. They'll often pick weekly themes or something to add some consistency. Some of the ones I really enjoy include the Comic Social Club, Comic Twart, and The Line it is Drawn on CBR (which is something a bit different but really cool). I think this is a great way for artists to get their work out there and for fans to see some really nice stuff. I just hope it works in helping the artists find a source of income for their work and not just a place where people steal artwork from for their own blogs or webpages. But that's a rant for another day.

Moving off comics to movies (and comic based movies) we had Iron Man 2, I'd agree it may not have been as good as the first but I still enjoyed it. Toy Story 3 may have been the best movie I saw this year but I don't see many movies. And as for Inception, I didn't care for it. It was pretty and had some cool scenes but I couldn't get into it. Though to be fair, by the time I saw it the ending was pretty much spoiled for me (nobody told me outright but I had it figured out).

And lastly, in terms of television I seem to be watching less this year. And the shows I am watching I don't even give my full attention (usually drawing while the TV is on so I can listen to it). I do still enjoy the Big Bang Theory, I know some "geeks" hate it for the stereotypes it pushes but I know so many people (myself included) who have little bits of each of the 4 guys in them. There was also the Walking Dead. I've been reading the book for a while now but I don't find it really thrilling me as much as it did early on. There's some intriguing stuff happening but it may be wearing a bit thin for me. Seeing it on TV was interesting but I wonder if the show will end up wearing thin for me as well, or maybe I'm just not giving a fair chance because of my feelings for the books. Either way, I'll be giving the second season a go.

I can't really think of anything else from this year which is rather sad. But I suspect that as I start seeing more of the "best of 2010" lists coming out I'll be finding new comics to check out. So feel free to let me know what you thought was the best of 2010, whether it's comics, TV, movies, or just important stuff that happened in your life.

And have a happy holiday whatever that holiday may (or may not) be for you and a great (and safe) New Year.

Cheers!
Posted by Darrell at 7:32 AM No comments:

Email ThisBlogThis!Share to TwitterShare to FacebookShare to Pinterest
Labels: 2010, ramblings

I know, I haven't been doing a very good job of blogging. I guess Twitter is winning out for me. But here's some rambling if you're looking for something to read.

I don't know if it's just me but I seem to be seeing a lot of blog posts, tweets, news articles, and whatever else focusing on market share, units sold comparisons, and other business type analysis. Of course these were always around but I normally felt they were the focus of guys in business suits who were financially invested in the companies or something like that. Now it seems like everyone's getting in on it. It makes me wonder why. And here's a few of the reasons I'm noticing.

Companies seem to be doing a really good job of getting people feeling like they're somehow connected to them and their success. Whether it's "I'm a Mac" or being a member of the Merry Marvel Marching Society (showing how comics have been doing this for a while, Stan Lee seemed to be one of the ambassadors in that area) they're connecting with their customers (somewhat) and making them feel like the companies success is somehow their success as well. And if someone says something bad about the company or their product, even if they may be right, they'll fight tooth and nail to prove them wrong.

I feel others seem to rely on these things to justify themselves and their spending. Almost like "I must have made the right choice buying that iPhone because the majority is doing it, right?" It's not even a question of which product may be right for you. So you want to point to these things and say to anyone who didn't buy the same as you that they are somehow in the wrong because they aren't part of the majority.

Some are looking to see trends so they can maybe predict the future, and not always for financial gain. Some just want to be able to throw stuff out there so in a few months they can look at the new stats and say "See, I was right! I'm so smart!" And some just want to appear smart by looking at this and just saying the exact same thing that every other blog and tweet says about the data.

And I think the media is playing its part as well. They are falling in line with companies spouting phrases like "game changer", "the future is here", "this will change everything", etc, etc (or if you go with comic solicits it's "universe changing", "nothing will ever be the same", "the new status quo", etc, etc). And they want to appear cutting edge so they bring out data in bar graphs, pie charts, and cute little cartoons.

Of course there are many reasons behind it all but here's where I'm at. I'm done with looking at that stuff. I don't care if a comic or a phone is the big seller, I want the one that's right for me. I'm not going to feel ashamed or "wrong" if it's not the one everyone else bought. So all this talk of market share and units sold doesn't mean much to me. And I'm sort of tired of people focusing on it and throwing it around like it's proof of something other than a company was successful in getting their product (whether it be good or bad) into the most hands (good for them).

So yeah, when Marvel puts out a crappy book I'll say that I thought it was crap. When Apple decides to do stupid censoring of apps and their content I'll say I don't want to support that. But yeah, feel free to tell me that I'm wrong because the Marvel book I think is bad outsells everyone else and Apple sells more iPhones than its competitors, I just won't care.
Posted by Darrell at 10:12 AM 1 comment: