Since I haven't blogged in a while I thought this might be a good time for some random comic ramblings. In particular, I would ramble about the latest Bluenoser page. When I was coming up with the story for the "Volume 1 Finale" (the name of which I will talk about later) two moments that stuck in my head were Best Man pummelling the Bluenoser followed by Victoria's entry. They're a pretty pivotal scene for this story and will lead in to "Volume 2". But they felt important to me and they were things that really stuck in my head for a couple weeks at least. So maybe this will give you an idea of just how mental some of these pages make me, or maybe I was mental before the page... Actually, let's not think about that.

The initial thought (or assumption if you will) was that these two events would be on two separate pages. Then I started thinking that with the way I'm going with the Bluenoser (trying to put more story into each page/weekly update) they were probably going to be on the same page (starting with the pummelling and ending with Victoria driving Best Man into the ground). That had me worried. I knew that with my artistic skills it was going to be difficult for me to really give the face driving panel the visual impact that I wanted and now I was losing out on space for it.

Then I finally sat down to write out the script for the story and it hit me that the page needed to include the last little bit of dialogue between Victoria and Best Man (or I guess just Victoria in this case). This happened for several reasons but overall, it just fit better on this page. So there goes more space for the pummelling.

And then I had the idea to add the panel with a thwooshing sound effect and maybe some grass going up to try to expand on the face driving.

So finally I got around to thumbnailing the page and trying to figure out how it was all going to fit. The downside, I decided that the pummelling had to be cut short and tweeked. I had originally planned for at least 6 panels of just Best Man punching the Bluenoser while he was down (trying to build up the intensity of each punch) but I was losing space and I also decided I needed that initial panel of Best Man punching Blue down to the ground, just to give the whole story on this one page. I briefly considered making the panels even smaller somehow but I wanted to keep them large enough that the reader could really see Best Man. Keeping the Bluenoser off panel was always the plan by the way, one of those "let the readers' minds run wild on their own" sort of things. But the hands being up were also key. The panels with just his hands were also always planned, they were actually how I thought the page would end at one point.

So eventually the thumbnail was done and then it was just a matter of drawing it up: 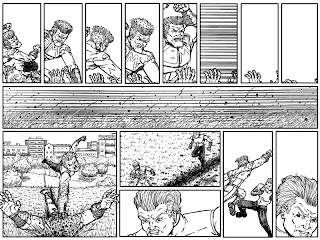 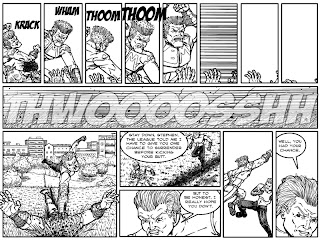 There were still some decisions to make, like whether I wanted a sound effect in panel 6, maybe it would clarify what's happening, but I left it blank. And whether I wanted Best Man to say something or possibly growl in that second last panel (that was one I went back and forth on right until the end). Also, the "thwoosh" may have taken away some of the detail of the grass and dirt being thrown up, I wasn't entirely happy with that part. And of course, the head driving also left me feeling a little let down. I think I had built it up way too much in my head that no matter what the outcome it just wouldn't have the impact I expected. The joy of being writer, artist, and letterer, you can play with things right until the end. You also get to drive yourself insane by doing so.

And another thought I had was about the emotion of this scene. I sense that people who have been reading from the start have really wanted to see this scene from Victoria's initial face push to them finally coming to blows. So I'm hoping there's a happy feeling of "Yes! Finally! I've been waiting to see this." Yet you look back just a couple panels earlier and you remember that the Bluenoser just got his butt kicked really bad. I have mixed feelings about that myself, as maybe it takes away some of the emotion of the earlier scene but in other ways I sort of like the shift. Plus, we'll get back to the Bluenoser eventually.

So that's some of what went into this page. Getting back to the title of this story ("Volume 1 Finale") and the whole Volume 2 thing, it feels weird breaking the Bluenoser up that way. My initial plan for the book was that it would just be short story after short story yet at some point early on I lost track of that plan and it started to become a bigger story. But still, labelling it with "volume 1" and "volume 2" seems off to me. It's a webcomic and it'll remain a webcomic so there probably isn't any reason to really break it up like that. Although, it does give me an excuse to take a brief break before starting "volume 2". And volume 2 will probably feel even more like one solid story (broken up into mini-stories). But I've decided not to lose any more sleep over that and just concentrate on telling the stories I've chosen to tell.

And now you get to tell me how insane that all sounds.
Posted by Darrell at 10:32 AM No comments: