Well, the Bluenoser hits 75 pages tomorrow. And since Drunkduck (or "The Duck Webcomics") does milestones in 25's I guess I should celebrate this as a milestone. Here's the page unlettered: 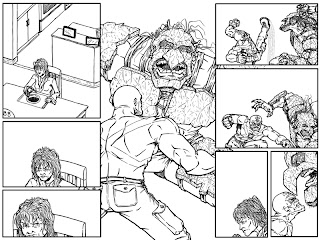 When I first started the Bluenoser I really didn't know where I was going to go with it. I decided pretty early on to keep it to short, 5 or so page, stories to keep things moving. As it went on the page count kept going up and the stories kept coming. Eventually a story idea came to me that I decided was important enough to introduce somewhere around the 100 page mark and that I should build to it. Now I just have to get the next 20 or so pages done. :-)

But it hasn't all been smooth sailing. There have been plenty of real life issues, friends and relatives with health emergencies, loss of my job, and my usual down on myself attitude. I've definitely had times where it's been a struggle to push through (like now for instance) but if you followed along during my Divine Leap days you'll know that's nothing new.

Anyways, it's 3 more days of work and then it's time to do some job hunting... And getting some more Bluenoser pages done.
Posted by Darrell at 7:38 PM No comments:

Well, it's been a pretty crazy last few weeks. I was given notice at work (March 30th is my last day) so I've been dealing with paperwork and transferring my work over to others as well as looking for a new job. But I've also been burying myself in working on the Bluenoser (possibly a little too much considering) and the 75th page of that will be up next Wednesday. Although comic convention season is about to get going so I have something to look forward to there. I'm eager to see how the first Ottawa Comiccon goes where I'm hoping to meet Patrick Stewart and Richard Starkings. I've been a fan of Elephantmen for a while now (even had some quotes from my reviews on their website) so I've always hoped he would drop by Fan Expo Canada but coming to Ottawa is even better. I'm also looking forward to making it to Fan Expo Canada again this year as well. I'll get another chance at Patrick Stewart (if I miss him here in Ottawa) but I always look forward to seeing the artist alley friends I've made (Caanan Grall, Andy Belanger, etc). But all that is a long way off, first, it's job hunting.

And now that you know where my life is currently at, let's get to some other ramblings.

Digital comics. Yeah, we're going there again. We have a new iPad, "HD" comics, Marvel/Mark Waid pushing some new digital ideas, etc, etc. Some people are still fighting it but I think that's a lost cause. Waid in particular has been getting a lot of grief from some comic shops that are upset with his digital push. I understand where that's coming from, it's their livelihood. But as callous as this sounds it's also Mark Waid's livelihood. To continue avoiding the digital world or treating it as an afterthought just doesn't make sense anymore. As a comic buyer I have a lot of friends who work at comic shops and I don't want to see them hurt by this but at the same time I want comics in general to thrive. We need to stop fighting the future and figure out a way to navigate it together.

The other thing that's on my mind is the trend of artists wanting to move away from doing commissions of characters they don't own (or owned by Marvel/DC in particular) at conventions. It's not a lot of artists mind you, or at least not to my knowledge, but there are some. They have several reasons, whether it's a recent legal decision or just personal preference or whatever else and I think I see their side of things. Though I will be disappointed not to be able to get a Hulk sketch from them I can't really fault them for it. Even if the companies say they aren't going after anyone who does it the facts show they could at some point down the road (if they change their mind, if you happen to tick them off, if you're too successful, if you happen to cross the imaginary "line" of what's okay, etc) and that can be rather scary.

Anyhow, I guess it's time for me to get back to looking through job postings. Have a good one!
Posted by Darrell at 8:59 AM No comments: