Enough talking about it I guess. I've started posting the Bluenoser on DrunkDuck (for now at least) and the preview starts here. 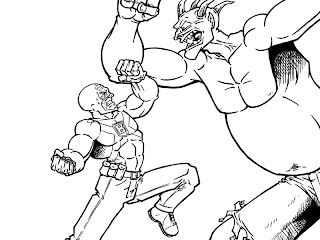 Posted by Darrell at 6:54 AM No comments:

Any minute now I expect the emails to start coming in from friends asking "Did you hear that they're going to kill Spider-Man?" To which I will sigh, shrug, and respond "Yeah, I did hear about it." And then the conversation will most likely lead to what other "death" storylines in comics we've had over the last few years only to either not be a death or to bring the character back in a few months. And of course there will be the discussion that this is the "Ultimate universe Spider-Man" and not the "real" Spider-Man. At many points during this discussion I expect my friends to laugh, get frustrated, mock me, and do a whole host of other stuff but in general, they will lose interest (though a couple may go into the comic store to buy the "death" issue still convinced they'll be able to sell it for lots of money one day) and end with some disparaging remark about me still reading comics.

So yeah, Marvel's getting a lot of press and I keep hearing that getting press is good for comics but you'll forgive me if I'm not overly optimistic about the whole thing.

Don't get me wrong, I don't like to take any story off the table. So if there's a good story to be told then great. But again, forgive me if I'm not overly optimistic.
Posted by Darrell at 12:41 PM No comments:

Digital: It's just a matter of time for me

I know I've talked about it in past blog posts, going digital for comics at some point, but I still haven't gone that route (at least not fully). I've tried out a few readers, bought a couple digital comics, and read way too much on the move to digital but I still feel I'm just poking a toe in the waters. Besides the odd dip in the digital pool I'm currently doing the TPB thing and buying an occasional issue (like Captain America: The Fighting Avenger which was really good by the way). But the more I think about it the more I think it's just a matter of time before I move to more digital for comics (while picking up only a couple in TPBs) and other reading material.

A big reason is the issue of space. Books are really starting to build up around my place and I have to keep getting creative with my bookshelves. It's not all comics, I do buy other books as well. Perhaps one day I'll get off my butt and finally take some of them to a local library (I'm a bit of a packrat and also like having the books around just in case I want to re-read something or share it with others) but digital will keep me from building them up in the first place.

So why haven't I gone digital? I guess there's still some issues I'm having. I've tried out various readers (for my iPhone and laptop) and it seems ComiXology is winning me over so that's partly resolved. But I just don't feel that reading comics on my laptop or iPhone is as "comfortable" or enjoyable as reading a book. Perhaps buying a tablet could fix that but then comes the cost of buying a tablet just to read comic books on.

Then there's the other costs. Digital comics still seem to be rather expensive. I've heard it's part of the "early adopter" thing (prices high at first to offset cost of software development but will go down eventually) or Apple taking a cut of the revenue in some cases but it still seems rather pricey to me. And it doesn't help that for most digital stuff I don't really "own" it. Most systems are set up so that if they want to pull the book from me for any reason they can. And if ComiXology (or whomever) goes out of business I may lose whatever books I've "purchased". So paying so much for a "rental" seems a little off to me. But maybe that's just the collector in me putting value to actually owning a physical object. I've also found having the physical comic useful as I do tend to lend out books quite a bit. I've got friends hooked on various comics by lending them a couple TPBs.

There's the delay as well (digital not being released at the same time as print) but that doesn't really matter too much to me. I'm already behind due to going to TPBs so waiting for digital (provided the books I want do make it to digital) won't be a huge difference... I hope.

But despite the cost and still not feeling there's an experience as enjoyable as actually reading a physical book, I still see it as just a matter of time before I break down, buy a tablet (or something) and go digital for my reading. I just wonder when I'll finally get off the fence about it.
Posted by Darrell at 10:16 AM 2 comments:

My plan was to post my new webcomic on DrunkDuck but the recent turmoil (many images were lost and there was an extended time where some things weren't working) there had me rethinking that. But I think I'll go back, hoping they'll have things worked out. The downtime did give me an excuse not to be posting pages while I build up a buffer though. :)
I still have an issue of getting pages done. I'm currently able to get only one page done per week. Maybe as I get into a routine or perhaps I'll find some way to change my style to increase that but it's unlikely at the moment. So I'm thinking of posting a batch of pages to get into the story and then going one page per week. I just have to make sure each page is worth the wait. That each page has enough going to move the story along for the whole week. I actually contemplated revealing the page panel by panel throughout the week (maybe even limiting myself to 5 panels per page) but I think that would be a little too gimmicky, too limiting, and just not the right fit for this particular comic.
One other thing that this time has allowed me to do is really think about where I want to go with the story. I've come up with some ideas that I'm really looking forward to writing up. Some of the ideas are not quite as upbeat and optimistic as I originally intended but I think mixed in with some lighter, fun stories that it will work. 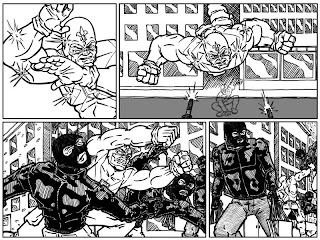 Posted by Darrell at 6:56 PM No comments:

I know it's been a while since I mentioned working on a new webcomic. To make a long story short, I went through a period of time where I was having a lot of doubts as to whether I wanted to get into doing another webcomic and having a lot of second thoughts about it. But I think that's behind me now and I am working on it. I'll have to figure out the art, changing things up as I go. I need to experiment a bit in order to get the pages done a lot faster while not sacrificing quality too much. And I figured I may as well experiment as I go so I can at least get posting some pages. So it may not be consistent but we'll see what works and what doesn't. I'll probably also play around with costumes and such too.
The synopsis so far: A veteran superhero returns home to fight crime in a city that's seen as too small and unimportant by the other superheroes. Though there may be serious tidbits I'll be trying to keep the tone fairly light. It's not like the city will be overrun with criminals or anything like that. 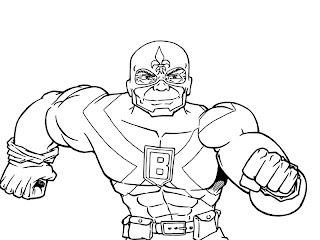 Posted by Darrell at 5:48 PM No comments: