I found out yesterday that today is "Dialog Free Comic Day". Unfortunately playing 9 holes of golf yesterday after work and watching the Smallville finale tonight has left me very little time to do much for it but I did sketch up a quick little one-pager featuring the Bluenoser (the title character from my new webcomic). I don't normally like posting my rough work but here goes: 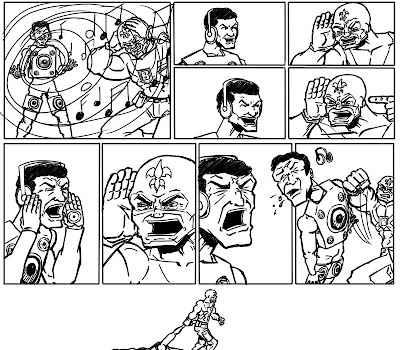 I kept meaning to post about Free Comic Book Day but never actually getting around to it. I got out a bit earlier this year than in the past and long story short, it was similar to other years. Out of the two downtown stores I visit one had a full on event with costumes (employees plus they were giving a discount to anyone who dressed up), a sale, cheap comics out in front of the store, and boxes and boxes of free comic books. It was incredibly busy so I grabbed a couple free comics I was interested in (Atomic Robo, Mouse Guard, and Super Dinosaur) and bought the latest volume of Fables and booked it to the other store to see how they were doing. They were not nearly as busy as they really don't put themselves out there but they had quite a few more people than usual in the store. That store really isn't laid out for a big crowd anyways I suppose, where the first store has an area at the front that they can put up tables with boxes of free comics and have people walk around this store has a small counter space with the comics in piles that you had to nudge your way up to. I decided just to pick up volume 1 of DMZ and take off. But in the end, both stores seemed to be doing better than usual with people actually buying stuff. It helped that both stores had a sale on.

I didn't go by the third store that is closer to my house. I had planned to but it's a long story. They are located inside a mall and typically don't do much. They put up two small 8x10 pieces of paper in their windows with "Free Comic Book Day" written in tiny font and usually have one person working the store for it. My brother had asked earlier in the week if they might have copies of the Dark Crystal/Mouse Guard and it turns out they ordered 1 for someone who had requested it before hand. It's hardly a good way to get new customers in but the manager of that store doesn't really care about comics anyways. He keeps them because it's constant income from his regulars but his store is more about sports memorabilia and nicknacks now. He usually only orders enough comics to cover his subscriptions.

But here are a few extra thoughts.

Upon arriving at the first store I noticed right away people coming out carrying piles of the free comics where it was clear they had grabbed at least 3 copies of each. Now for some of them I have to think that maybe they have/had 2 or more kids or maybe both the husband/boyfriend and wife/girlfriend wanted their own copy but the sheer number kind of made me question it. Same went for the Green Lantern Heroclix, with people grabbing a handful of those. And upon leaving that store they were on their way to the other comic store to pick up more.

But there were also a lot of people buying stuff, more so at the first store. Funny story, the guy in front of me in line had a few issues of Dr Who that were labelled $7.50 and he was frantically trying to figure out what they'd come to after the discounts to see if he had enough money. The look on his face when the cashier rang them in and said "that'll be $2 please" was pretty priceless.

Then there was the kid factor. The first store had quite a few kids. Some were being dragged along by their parents who were more interested in the comics than the kids were but others were pretty excited. And I think that's important for the comic stores, to get the next generation excited about comics. The second store had fewer kids but still had a couple.

Then there was the overall atmosphere. I had mixed feelings about this. At the first store the staff was pleasant and interacting with people with some of them in costume. But the store was so packed that it's not like you could really stand around and talk or anything. It was mostly just apologizing as you squeezed your way through the aisles. The second store had two staff, one in costume and the other sitting behind the cash being his usual not-so-talkative self. And there wasn't really an overwhelmingly happy feel to the place.

So that's my take on the day. I really didn't spend too much time at either store so I can't talk about the whole day but like other Free Comic Book Days I took away some positives and some areas where I wonder if things could be better.
Posted by Darrell at 9:06 AM No comments: