The last few days I've spent quite a bit of time working on "inking" a drawing that a friend did and it's completely kicking my butt, these Final Fantasy characters are crazy complicated with all the details they throw in. And it doesn't help that I've been feeling like crap and only able to keep down toast and water.

As for the review...

Guarding the Globe Volume 2: Hard to Kill -- I had my doubts going into this volume but it definitely seemed to work for me. It juggled several really big villains while giving some character moments (mostly about Brit but some others get to shine as well). And the villains are pretty unique and are quickly shown to be major threats in different ways. The art worked for the most part, there were a few panels that I thought were a bit off but nothing too major. All in all, I think this is a fairly solid side story to Invincible (although you can actually read this book without reading Invincible) and I'll stick around for a little while.

Went to the dentist today for a cleaning (and X-Rays). No cavities so I guess that's a good thing.

The Dark Crystal: Creation Myths Volume 2 -- Archaia is really kicking butt with their variety of books and top notch production. This is a beautiful book with a great story. Jim Henson created such an amazing world with the Dark Crystal and this book is a worthy successor to the movie. Some may disagree with me on that point but it's how I feel. If you're a Jim Henson/Dark Crystal fan then I feel this is a must read for you. And even if you haven't seen the movie, it's just a wonderful comic. Now I can't wait for volume 3 to come out.
Posted by Darrell at 8:13 AM No comments:

I've had KickStarter on my brain as of late. Of course part of the reason for that is a certain TV show getting a movie started on there. But there's also the issue of some outstanding "rewards" that I'm having problems with. And I've noticed that I haven't contributed to a campaign in a really long time. There are some simple reasons for this like no "must need to donate to" projects seem to have come up for me lately. There are a few that I think "that doesn't look too bad" but nothing really stood out. I'm also currently "in between" jobs so it's not like I have money to spend.

But having said that, there are other issues. I've had pretty good luck in the projects I've contributed to following through with the project and rewards but there have been a few outliers and they're really bugging me. Some are keeping in touch and trying their best (even if their best isn't that great) to explain what issues have come up and what they're doing to fix them. Others have been downright horrible. They don't respond to me personally but post generic "the rewards have been shipped and you should be getting yours soon" type messages for everyone who's complaining, sometimes they've been posting these messages for many months. Clearly, taking the time to respond to each person would take time I suppose but the fact that they are having that many issues is telling. Some don't even reply with anything that positive. And spending time trying to track down what's happened to my reward, nagging people who have now moved on to other projects and getting no response? Not a great feeling. I don't like to be burned, I take it very personally, so a couple bad experiences really spoils it for me.

The other issue is the companies coming in after the fact. I know there may be weird circumstances that come up but it leaves a bad taste in my mouth when I'm putting money down to fund a project (and not just for the reward) only to have them announce right after the project is funded that some company is stepping in to take over the project. It feels like instead of companies putting up their money to make something happening they're now happily standing by while everyone else does only to scoop in when there's money to be made. Now I'm no expert on these matters, there's probably a lot more to it than what I see, but it does rub me the wrong way. And it's not the business model I want to see.

So despite the initial good feelings I had about KickStarter, it has soured a bit for me. I'm not looking to throw it out altogether, but I am going to be much more hesitant about what I put my money into.
Posted by Darrell at 11:23 AM No comments:

Yes, I've gone quiet for a little while yet again. So just a quick update on what I've been reading. I started "The Casual Vacancy" but being a slow reader to start and due to the nature of the book (a lot of characters being introduced right off the start, that always slows me down as I go back and forth to keep track of who I'm reading about) it's going to take me a little while.

I also read "Terry Moore's How To Draw". Moore is a great storyteller (as you may know, I really enjoyed Strangers in Paradise and now Rachel Rising) and this book is an excellent (and pretty quick) read for aspiring artists. It's only a few lessons and doesn't go into too much detail but they are really good lessons. I'll be keeping this book close as I continue on my own comics/art.

Next up will probably be the Dark Crystal: Creation Myths Volume 2.
Posted by Darrell at 7:36 AM No comments:

It's been a bit of a weird day.

Rachel Rising Volumes 1 and 2 -- When I was buying these books the woman working at the cash said it was a great series and really creepy. Since it's Terry Moore I figured it was great but I sort of brushed aside the "creepy" comment. Not that it would have changed my mind but yeah, it's creepy. And, other than some balloon placements that I felt were a bit questionable, it's darn near perfect storytelling. It's an excellent story, great characters, and well told in terms of the writing and art. Yeah, it's a little on the dark side (we're talking some violence and icky-ness, not gore for gore's sake) so maybe not for everyone but still, a really great series. I couldn't put them down and now I can't wait for volume 3. Definitely on my recommended reading list (for the fans of the slightly darker stories).
Posted by Darrell at 2:46 PM No comments:

So I've been telling myself that I really need to get the Bluenoser pages done quicker. I keep saying that I need to back off from the 9-10 panel pages, maybe simplify the artwork some more, or do something so they don't take me so long to do. Then I come up to volume 2, part 2, page 5 and I see it's only 6 panels in my script. I pat myself on the back and say let's get to drawing. But then I second guess myself, I think I need to extend the dialogue, add some more fighting, and "fix" a couple other things. But I still have it down to 9 panels so that doesn't seem so bad. Then I really get down to laying it out (just basic stick figure stuff) and... It's now 14 panels: 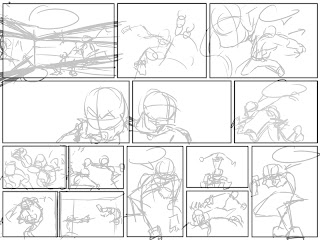 Fortunately, it's more action and dialogue and I can probably get away with a minimum of background work. But still, someone smack me upside the head.

I also read the digital exclusive Atomic Robo that was given out at ECCC and went on sale today. It was pretty interesting to read it online, some of the digital tricks/technique worked for me, some didn't. But I think these things need to be tried out at some point so we might as well get to it.
Posted by Darrell at 5:03 PM No comments:

That new Iron Man 3 kicks some serious butt. Really looking forward to it and I hope it's as good as it seems. I was talking to Meaghan over on her blog about how Marvel doesn't really have the best track record when it comes to third movies (X-Men, Spider-Man, and Blade for example) but this one is looking pretty good.

Captain Marvel Volume 1: In Pursuit of Flight -- Kelly Sue DeConnick has been working hard to create something special on this book, especially in terms of connecting with fans. And she seems to have amassed a decently sized army, and I don't have any numbers to back it up but based on her tweets it has a strong female presence unlike the vast majority of other comics out there. So based on this following (and how friendly she was when my brother and I met her a couple years back at Fan Expo Canada) I decided to check it out for myself.

We'll start with the good. It's well written. It introduces Carol Danvers and establishes her currently changing status-quo to new readers while (I think) not alienating existing fans of the character. It's a classic example of a superhero story really being a character piece. And the art is very good, every page is crammed with so much great work while maintaining the readability. It's a style that may not work for some, I've read a fair amount of negativity around it that could be considered valid, but I enjoyed it.

But, as for the bad, I'd have to admit it's just not a book for me. I know this is going to sound bad, and it probably is bad (either it says something about me or whatever), but I have to be honest. Despite comics (especially "mainstream" comics) being very much a "boy's club" in many ways and despite comics needing books like this that focus on strong female characters, I just find a book that focuses as heavily on it as this one does is not for me. So maybe if I had unlimited funds or if I start to notice that there's been a shift in the story or maybe if I just don't have anything else to read at some point then I may check out volume 2 but otherwise, probably not.

I'm definitely not regretting checking this volume out though. It is still a very well done comic and a good story. It was just one of those "not really for me" type things.

Wow! Maybe I need to rethink calling these "quick" comic reviews. :)
Posted by Darrell at 11:09 AM No comments:

Finally starting to make a dent in my to-be-read pile of books. I think a few more books and then it's time for my Sandman re-read.

The Underwater Welder - Jeff Lemire has a very interesting art style that may not work for everyone but his storytelling is top notch. Although there's nothing really that novel about this story he crafts an emotional page turner that keeps you engaged from start to finish. Not much else I can say, this book is definitely worth checking out.
Posted by Darrell at 11:27 AM No comments: