Getting Back to "Work"

Since the end of Divine Leap I've been debating doing another webcomic. There are the cons like it ate up a lot of my time and I learned that I really sucked. The benefits included learning a lot about making a comic (or webcomic in this case) and why I sucked, getting to know some DrunkDuck members who came across my book, and having some fun along the way.

I had a few ideas that I was playing around with as Divine Leap was coming to a close but once I was done they just didn't feel right. Some were sweeping stories that would require 400+ pages to tell and I didn't really want to do that again. Others just didn't feel exciting enough. Then this past weekend I had a thought (yep, just one). I got into comics reading "simple" superhero comics so why not do a simple superhero comic. Not "something that nobody has ever seen before". Not "something that will blow your mind and make you second guess your sanity". Just a superhero story. A good guy (well there will be more than one good guy eventually but we'll concentrate on one) versus some bad guys. And I could do it in small, 10 or so page, stories. Just get back to doing something small and simple. I think even for the art I'll try to be "looser" and let myself play around a bit more (less time sweating the small details).

So the designs are getting drawn up. The first 7 pages of the first 10 (or so) page story are written. The second story is currently building up in my head. And hopefully it'll be fun.

I really hate/suck at colouring. 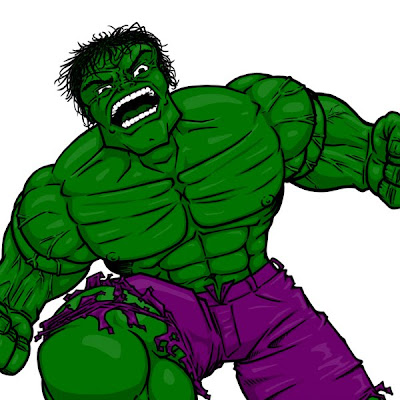 Posted by Darrell at 4:04 PM No comments:

So after not setting foot in my local comic shop for a couple months I decided to make the trek downtown. I was reminded of what I miss about the shop (the friends, the comics) and what I don't miss.
The first thing is that I'm not entirely at my best in crowds or even small groups. So when the numbers start growing I feel pretty out of place. But secondly, I don't have the thickest skin and one of the things that gets through that skin the fastest is people not listening, talking down to me, and treating me like I don't know what I'm talking about. And I find that happens quite a bit in comic stores, I could probably find at least a few people who feel I've done it to them. So I guess I deserve it but that doesn't make me feel any better when it happens to me.
So yeah, a nice visit ends up with me grumbling to myself on the way home. Did I mention that I tend to hold a grudge with that thin skin of mine?
Posted by Darrell at 5:27 PM No comments:

Email ThisBlogThis!Share to TwitterShare to FacebookShare to Pinterest
Labels: ramblings

So last night I finally finished Divine Leap, completely. I had finished the main book (with some lettering I had put off until the end) over the weekend so it was the side story I finished last night. And it all gets posted tomorrow night. It took me a long time to get here (too long in my opinion, I've lost track of how many years it took) but over 460 pages later it comes to an end. It's going to feel weird going home after work and not thinking "I really need to get that page of Divine Leap finished tonight." Or worrying about my buffer of pages shrinking and wondering if I should change my update schedule.

It was quite the experience. I quickly learned just how I little I knew about making comics and how naive I was. But I definitely don't regret it, I appreciate so much of the medium that much more and made a few friends along the way.

So I'm left wondering "What now?" I've had a few ideas brewing in my head but I don't really know which one I want to tackle first. I know I don't want to take on another 400+ page comic, that's for sure. So perhaps something that fits into individual strips. Or perhaps short little 10-15 page stories. But I think first off it'll be a little bit of a break for me as I really mull over my ideas and see which one really shines for me. And perhaps I'll actually post on this blog a bit more often.
Posted by Darrell at 12:31 PM No comments: