I'm really doing a horrible job keeping this blog going. But in an attempt to at least keep it on life support, here's my Fan Expo Canada 2012 report.

Going in to this year's Fan Expo Canada I didn't really have a must see/do thing. In the past there were certain celebrity or comic creators that were my top priority. This year, I was planning to meet Alan Tudyk but not doing so wouldn't ruin the weekend for me. And so the sketching duels and artist alley became my priority. And unfortunately I couldn't get a decent shot of the sketches with my phone unless I was in the front row. I also didn't win any of the sketches this year and they were pretty awesome. So let's get to the breakdown, detail by detail.

Thursday was mostly a shopping day for me along with saying hello to Caanan Grall. A friend had asked me to look for some "Captain Action" stuff for him but I failed on that quest. But for myself, I picked up "You, Me, and Zombie" by Agnes Garbowska and she did this great Hulk watercolour inside: 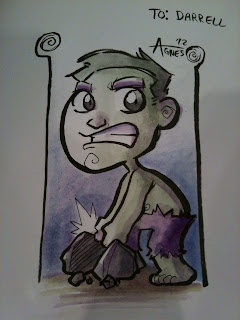 Then got this Hulk commission from Adam Warren (of Empowered fame): 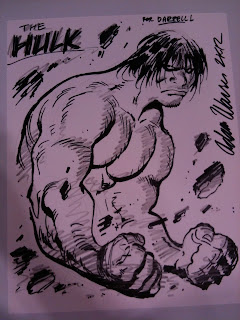 And then finished the day off attending the Esad Ribic vs Tony Moore sketching duel. They did the Joker and the banter was funny (and very crude, this one was not for the kids).

Friday started off with a duel between Bob Layton and Adi Granov. Bob definitely dominated the discussion during this duel. They decided to do several quick sketches and then end with Iron Man. They were all pretty awesome. When I discovered that Alan Tudyk was there on Friday (I thought the program only had him listed for Saturday and Sunday) I decided to skip the 2:00 duel and grab his autograph. Then I headed to the all-Canadian duel between Yanick Paquette, Jay Fabok, and Kaare Andrews (Francis Manapul had to cancel) where they drew the Hulk. Yanick's trash talking was a definite highlight but the art was all pretty stunning as well.

Saturday started off with getting Stan Lee's autograph (I had bought a ticket for a friend that was coming down for the weekend but when he couldn't make it, I decided to take advantage of it myself). The line ups on Saturday were crazy so most of my day was spent at the sketching duel room. It was David Finch vs Tony Daniel (Greg Capullo declined to draw and decided to take the microphone, taking some questions and telling stories from his youth that I probably shouldn't repeat), Jill Thompson vs Sara Richard vs Agnes Garbowska vs Chrissie Zullo (Becky Cloonan could not make it, too bad for me as I wanted a commission from her), and Ron Garney vs Dale Eaglesham vs Dale Keown. All were lots of fun. Here we have Finch's Catwoman: 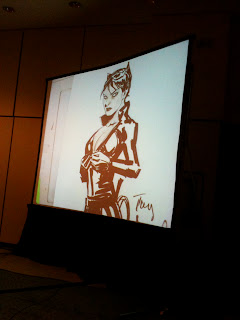 For Sunday, it was the Frank Quitely vs J. Scott Campbell duel, picking up my last commission for the weekend from Bob Layton: 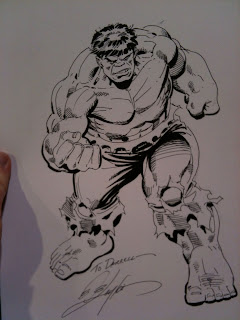 Then the Amanda Conner vs Darwyn Cooke duel. This was another entertaining duel with Darwyn showing up late resulting in his funny line insulting Game of Thrones fans (the suggestion Amanda settled on was a mashup of a Game of Thrones character with Squirrel Girl). In the end we had Amanda's mashup: 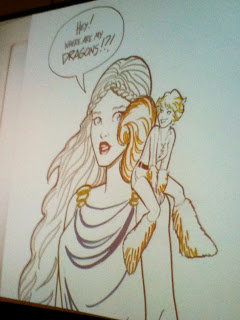 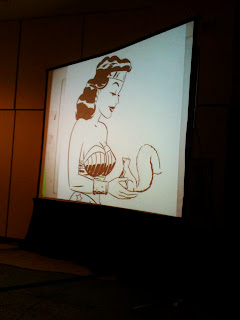 The last duel of the weekend was Carlos Pacheco vs Ed McGuinness. Again, it was a lot of fun as both artists powered through several sketches but Carlos definitely dominated the discussion as Ed was clearly exhausted at this point of the Expo.

And I was pretty exhausted myself. Guess I just don't have the energy I used to. But it was a lot of fun thanks to all the artists who really seemed to be having a good time with it. I keep hearing that sketching duels aren't a regular convention thing and I think that's too bad, they're usually very entertaining. Though we were pretty lucky this year with some great artist match ups and some very good personalities hosting (or whatever it's called to do the microphone thing).

So that was it for Fan Expo Canada. It was a great time and I'm already eager to see what happens next year.
Posted by Darrell at 8:05 AM No comments: