A Couple of Fan Art Sketches

I've been wanting to do up some fan art for a while now but just haven't had the time. So I decided to cheat and double up the sketches. All characters are owned by their respective creators and were used without their permission.
First up we have Smash from the "Smash" webcomic by Chris and Kyle Bolton and the Araknid Kid from "The Araknid Kid" by Josh Alves (though Josh is currently working on Heropotamus at the moment). 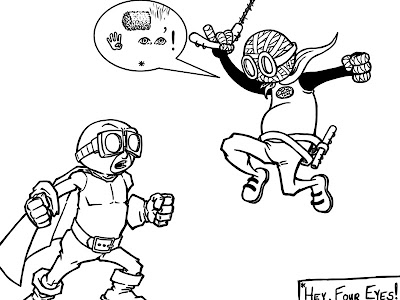 And next we have Billy Butterman from Andy Belanger's Bottle of Awesome (hence the bottle) and Sam (as the Peanut Butter Genie, hence the peanut butter jar) from Caanan's Celadore (Caanan is current working on Max Overacts). 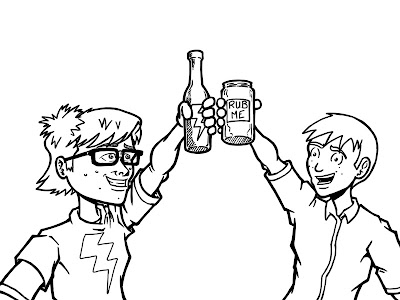 Ha! That team up could be disastrous. ;o)

That is SO AWESOME! Thanks Darrell - we'll be seeing more of the Kid soon! (Smash and AK would be a great team-up.... go team Goggles!)