I guess I just haven't had much to blog about lately. Plus, does anyone even blog any more? I won't go in to the personal/work stuff, it's all rather depressing. So let's stick to comics and other fun stuff.

With all the stuff going on it's been rather tough to find time for the Bluenoser so I'm down to one page per week but I'm keeping up with that at least. Here's a preview of this week's page: 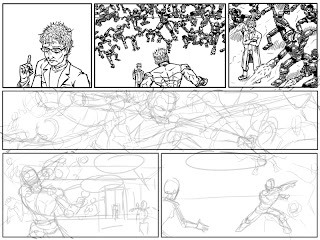 As you can see I still have a ways to go on this page. My original plan for this book was to keep it going with short (5-6 page) stories but then I decided to do a "major" story once I got close to the 100th page so it's been about getting stories out that build to that one. Okay, that may not have made as much sense as it did in my head. Sorry, I'm rather tired at the moment. I guess the "move" to its own page was a little unnecessary as well as DrunkDuck has been somewhat stable and what few readers I have seem to stick to there. But oh well, it's good to have a mirror up just in case.

In terms of what I've been reading lately, I just finished the Walking Dead: Rise of the Governor. I was actually rather disappointed in it. Perhaps it's just my dislike of the Governor or something else (which I don't want to say/spoil) but I just didn't enjoy it as much as the comic. I've also finished off some comics like Kill Shakespeare volume 2 (really interesting idea and well executed), Walking Dead volume 15 (despite parts of this story seeming to drag on I'm still hooked on it for some reason), and Sweet Tooth volume 3 (while reading this book I wasn't sure I'd buy volume 4 but by the time I got to the end I was eager to see what happens next). I've also started reading "Hark! AVagrant" and I'll probably be starting Jack of Fables volume 9 shortly. I have a lot of books on my "to be read" pile so I'm hoping to tackle some during the holiday week (between Christmas and New Year's).

So back to the drawing board (or the Cintiq sitting on my dining room table at least).
Posted by Darrell at 10:52 AM

Would you drop me an e-mail; I need to consult your knowledge...

When you get a chance, could you drop me an e-mail? I need to consult your knowledge

PS - I may have posted this comment twice. Sorry about that.

I don't have your email address so can you contact me at thedarrellferguson on gmail?